“Chilly, glamorous slap, one that features a casually virtuoso rap performance over a restless, minimal beat that sounds like prime club material.” - Stereogum

“The only song you need to hype yourself up.” - Nylon

“This one is something special.” - E!

"Everyone has dreamed of what it would be like to win the crown in a beauty pageant. So Princess Nokia made that fantasy a gorgeous, sarcastic reality.” – Billboard

The song earned major praise everywhere from Vogue to Rolling Stone to E!, FADER to Afropunk to MTV, and more. She released a Genius Verified for the track, as well as a live Vevo Ctrl session, and graced the cover of Cultured Magazine. Earlier this week, Princess Nokia starred in the latest ‘Beauty Secrets’ video for Vogue following past subjects including Rihanna, Tracee Ellis Ross and Kendall Jenner.

Princess Nokia will make her acting debut starring in Angelfish, directed by Peter Lee. The film premiered at the United Palace Theater in NYC and is released on streaming services now.

The New York Times Magazine says Princess Nokia has “what it takes to light up the stage,” spotlighting her as one of 12 performers to watch in an issue out this May. Following a series of releases, in 2017 she infiltrated the cultural conversation with her independent breakthrough, 1992 Deluxe.

Not only did it reach the Top 25 on the Billboard Heatseekers Chart, but NME pegged it among “The Albums of the Year,” Noisey graded it “A,” and The Guardian rated it 4-out-of-5 stars.

Regularly selling out headline tours and consistently churning out tens of millions of streams, she keeps her business independent with calculated moves to be heard even louder—ranging from hosting an Apple Music Beats 1 Radio show “The Voice in My Head with Princess Nokia” to co-starring in the high-profile Maison Margiela launch for Mutiny, with additional acting credits and entrepreneurial endeavors to be announced soon. 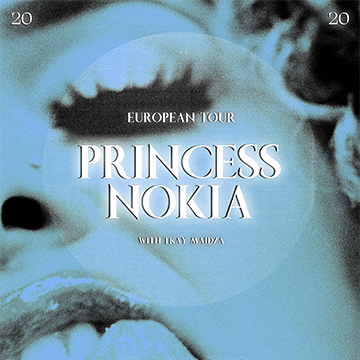