“It’s great to see these classic Irish folk songs given a 21st century treatment. It sounds like they’ll be hits for another century at least” – The Edge

“If you need an urgent injection of nourishment for your mind, body and spirit, treat yourself to this invigorating excavation of The Great Irish Song Book” – Jack Hayden Hot Press

As one of the world’s most renowned and imaginative interpreters of Irish folk music, Dervish have devoted the last three decades to gently reinventing the traditional songs of their homeland. The Great Irish Songbook which was successfully launched by Dervish and Rounder Records at The London Palladium in September last year is coming to Vicar St. this May 3rd. An array of special guests on the night include the wonderful Eddi Reader, Cara Dillon and Brian Kennedy for its Irish Premier. Like all shows from The Great Irish Songbook you never know who will turn up on the night? Not to be missed!

On their debut release for Rounder Records, the Sligo-based band take that effort to a new level by joining up with over a dozen luminaries across an eclectic range of genres. Featuring such beloved artists as Vince Gill, Steve Earle, and David Gray, The Great Irish Songbook both preserves the boundless spirit of each song and brings a whole new vitality to iconic traditional songs of their homeland, one that’s sure to endure for generations to come.

Throughout The Great Irish Songbook, Dervish build off the dynamic they’ve brought to their 13 previous albums and dazzling live performance: a kinetic union of technical brilliance and undeniable soul, endlessly fortified by their immense creativity. With the help of their guest artists, Dervish’s intricately sculpted sound expands and widens and takes on new textures, revealing the limitless possibilities within a single song. The result is an album that instantly transports you to a more charmed state of mind and—like all the most illuminating journeys—imparts a deeper understanding of what’s most essential in life.

Produced by Graham Henderson (a musician known for his work with artists like Sinéad O'Connor), The Great Irish Songbook delivers 13 of the most iconic and best-loved songs in the Irish tradition. In assembling their lineup of featured guests, Dervish reached out to the many artists with whom they’ve bonded over a shared passion for Irish folk, then called on each musician to select their most cherished song within the genre. Recorded mainly at The Magic Room in Sligo, the finished product finds each collaborator imbuing the album with their own distinct sensibilities while lovingly upholding the time-honored character of the songs.

In fact, The Great Irish Songbook drew such intense interest from musicians around the world, Dervish ended up generating nearly five albums’ worth of material in the process of making the album. That enthusiasm speaks not only to Dervish’s esteem within the music world, but to the depth and splendor of Irish folk itself. To that end, The Great Irish Songbook encompasses everything from lovelorn ballads to traditional dance music to songs customarily sung at funerals, its moods continually shifting from longing to joy to delicately rendered heartache. And with so much pure feeling poured into every line and lyric, it’s all but impossible not to get swept up in the songs, an element that lends the album a quietly cathartic and restorative power.

Within its first few tracks alone, The Great Irish Songbook shows the extraordinary scope of the album and the musicianship behind it. On “There’s Whisky in the Jar,” for instance, Nashville-based bluegrass band The Steel Drivers channel their freewheeling energy into one of the most widely performed traditional Irish tunes of all time (recorded by everyone from Thin Lizzy to Metallica to Jerry Garcia), capping the song off with a sweetly rambling Irish reel. Then, just a track later, Irish singer/songwriter Imelda May brings her mesmerizing vocal work to a particularly poignant take on “Molly Malone,” joining Dervish in adding new warmth and vigor to the unofficial anthem of Dublin.

Poetry also infuses much of The Great Irish Songbook, such as on the Kate Rusby-sung rendition of “The Sally Gardens” (a W.B. Yeats-penned serenade) and the D.K. Gavan-authored “Rocky Road to Dublin,” a 19th-century story-song delivered with unabashed brio by famed Irish actor (Harry Potter) and part-time fiddle player Brendan Gleeson. Meanwhile, “On Raglan Road” transforms Patrick Kavanagh’s lovesick verse into a moment of sublime melancholy, thanks in no small part to the tender tenor of country star Vince Gill.

One of the two newly written pieces on The Great Irish Songbook, “The West Coast of Clare” unfolds as an exquisitely stark number threaded with the soulful vocals of Welsh singer-songwriter David Gray. And in an especially glorious offering, Steve Earle accompanies Dervish for a wistful yet rousing version of “The Galway Shawl,” closing out the track with a full-hearted sing-along.

Dervish again prove the enduring significance of even the most timeworn songs. And in a way not unlike the folk revival of the 1960s, much of The Great Irish Songbook celebrates a spirit of togetherness, with a conviction that’s gracefully understated but powerfully felt. For Dervish, that sense of community and connection is both an ideal takeaway for the album and the driving force of its creation. “With this record we brought in people from genres sometimes totally unrelated to what we do, but still found a way to create some beautiful music together,” says Shane Mitchell Accordion player with Dervish. “I think that’s an incredibly important thing to consider in life as well, especially now: everyone can find a way to collaborate, even if you’re coming from what feels like completely different places.”

Dervish - The Great Irish Songbook Live At Vicar Street May 3rd. Tickets are from €36 on sale Monday Feb 17th at 9am through www.ticketsmaster.ie and other usual outlets nationwide. 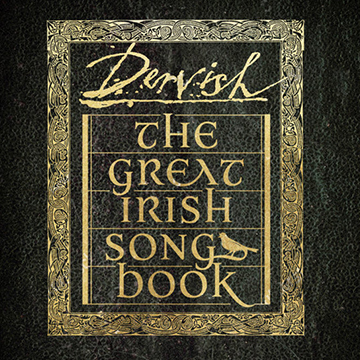