“…a stark, at times almost gothic take on the mosaic of Americana” CLASH

Nashville-based sister duo Larkin Poe have today announced a European Tour throughout May 2020. A date will include a live show at The Button Factory 2nd May 2020.  Tickets €22.50 on sale now!

Steeped in the traditions of Southern roots music, the Atlanta-born sisters released their critically acclaimed fourth album ‘Venom & Faith’ last year. The album showcases their mastery in orchestrating, harmonizing and breathing new life into the musical heritage of their upbringing as they create a powerful, modern-day depiction of what roots rock should sound like.

Descendants of celebrated US writer Edgar Allen Poe, since forming Larkin Poe in 2010, Rebecca and Megan have proven a formidable duo both in and out of the studio. In 2014, producer T-Bone Burnett enlisted them for ‘Lost On The River: The New Basement Tapes’, a project that also saw contributions from Marcus Mumford (Mumford & Sons), Elvis Costello, Jim James (My Morning Jacket), Taylor Goldsmith (Dawes), and Rhiannon Giddens. The sisters have performed at Glastonbury Festival twice, and were named ‘Best Discovery Of Glastonbury’ in 2014 by The Observer. They have opened for and been in the backing band of Elvis Costello and Conor Oberst; and supported the likes of Gary Clark Jr and Bob Seger among others.

Larkin Poe are currently writing their fifth album, slated for a Spring 2020 release. 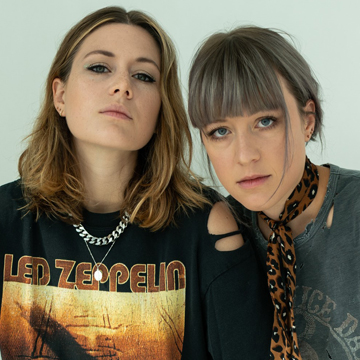