Through bad breakups, bouts of loneliness, existential crises, and even Pandemics, true friends stick around. Instead of bending and breaking, their bonds crystallize in the roughest of rough patches. If friendship had a sound, it would be Peach Pit. The wistful grooves, glassy guitars, and sun-kissed melodies feel like they could only be made by musicians who have spent close to a lifetime (or at least half of their lives) together.

The group continued to gain traction with their 2017 full-length debut, Being So Normal. Among many highlights, “Tommy’s Party” and “Alrighty Aphrodite” both surpassed 50 million Spotify streams as they graced the bills of festivals such as Shaky Knees Festival, Bonnaroo, Firefly Festival and many more. In 2020 Peach Pit revealed You and Your Friends, which DIY Mag hailed as “12 tracks of infectious indie-pop gems” while Atwood Magazine described the band as being “at the cutting edge of the alternative music scene.” Carrying this momentum into 2021, they kick off the next chapter of the band and their friendship with the single “Up Granville.” 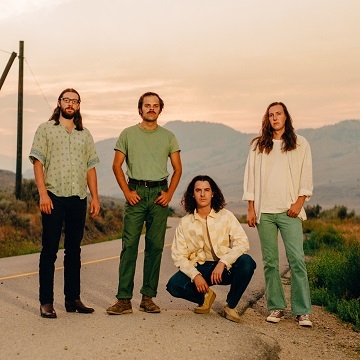