‘The End of The Movie Tour’

Singular artists proudly presents Lizzy McAlpine live at Vicar Street Dublin, 2nd June 2023.  Lizzy McAlpine had a clear vision for five seconds flat, her second album: she wrote a 14-song story arc about heartbreak, and then made a short film to accompany it.

Lizzy McAlpine had a clear vision for her second album, Five Seconds Flat. The album tells a 14-song story about heartbreak and Lizzy created an emotional short film to accompany it. After her 2020 debut of Give Me A Minute, Five Seconds Flat was a big step in a new direction and drew praise from the likes of Finneas, Phoebe Bridgers and Shawn Mendes.

The past year has seen Lizzy sell out her first ever headline tours of North America and Europe. She has also performed on Jimmy Kimmel Live and the Ellen DeGeneres Show and she collaborated with Finneas, Jacob Collier and John Mayer. Her music to date has amassed over 300 million streams. 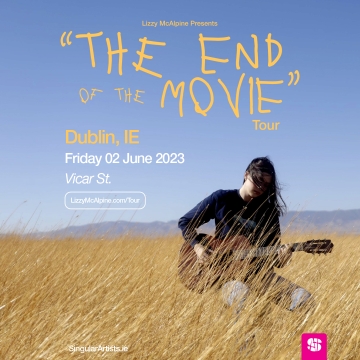