Sixth Studio Album On The Prowl Scheduled For Release On February 24, 2023.

With the recent announcement of their sixth studio album On The Prowl and the launch of their “Who’s Your Daddy(‘s Jokes)” series on YouTube, California rock legends Steel Panther have released another song from the upcoming album available worldwide on February 24, 2023. “1987” is a reflective look at one of the greatest years in rock music supported by unforgettable hooks, relatable lyrics and fretboard fireworks. Satchel, Michael Starr, Stix Zadinia and Spyder pay homage to the icons of the year including Guns N’ Roses, Poison, Whitesnake, Ozzy Osbourne and Van Halen to name a few.

To celebrate the release of “1987,” Steel Panther is also announcing a massive world tour in support of their latest release. The On The Prowl World Tour 2023 is set to kick off in February and will run throughout North America through April, before bringing the party to the United Kingdom and Ireland in May.

For the uninitiated, Steel Panther was formed in 2000. They have continuously flown the flag for heavy metal higher than anybody this century. 2009’s Feel The Steel announced their arrival as saviors of rock, showing guests such as Corey Taylor of Slipknot and Stone Sour, M. Shadows of Avenged Sevenfold, Justin Hawkins of The Darkness, and Scott Ian of Anthrax how it’s done! On its heels, Balls Out [2011] boasted collaborations with everyone from Chad Kroeger of Nickelback and Nuno Bettencourt to Dane Cook. The group unleashed a string of banging LPs, namely All You Can Eat [2014], Lower The Bar [2017], and Heavy Metal Rules [2019]. Meanwhile, they earned ink from Billboard, Classic Rock, Consequence, Metal Hammer, and more, tallying hundreds of millions of streams views in the process.

They’ve logged countless miles on the road (and stolen groupies from) Aerosmith and Stone Sour in addition to leaving festivals such as Download begging for more. Steel Panther is a global phenomenon with five full-length albums, touring across the world, platinum-level You Tube status and high-profile television appearances such as Jimmy Kimmel Live, Larry King Now, and FOX NFL Sunday. Now, the quartet—Michael Starr [lead vocals], Satchel [lead guitar], Spyder [bass], and Stix Zadinia [drums]—reach another level altogether on their sixth full-length offering, On The Prowl. 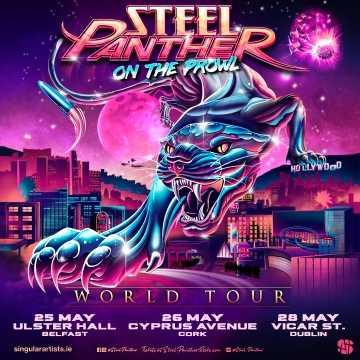