We are delighted to announce the incredible Lindsey Stirling will return to Dublin’s Vicar St on 5 April 2017.

Lindsey Stirling remains fearless enough to always dream big. In four years since the release of her 2012 self-titled debut, the electronic music impresario, classically trained violinist, dancer, and artist quietly and humbly became one of the 21st century’s most innovative stars by clinging to her groundbreaking vision of cinematic violin-driven electronic music. After bowing at #2 on the Billboard Top 200 and #1 on the Dance/Electronic Album Chart, holding #1 on the Classical Album Chart for 21 consecutive weeks, and receiving a Billboard Music Award for “Top Dance/Electronic Album,” her sophomore opus Shatter Me would not only garner an RIAA Gold certification, but it would rank as the #2 Dance/Electronic Album and #1 Classical Album on Billboard’s 2015 Year-End charts.

When it came time to begin work on her third full-length album, Brave Enough, Lindsey took a look at her journey thus far and asked herself an important question…

“I basically wrote Shatter Me about overcoming my anorexia,” she admits. “So, I thought, ‘What’s the next step of the process?’ I realized that breaking free is just the beginning. In order to continue through the journey you have to decide every day not to crawl back into that shell when things get tough. It’s easy to fall into our old habits. You can’t feel true joy, if you numb the bad. Brave Enough is a continuation of the story. It draws on the same contrast of light versus dark, but the flow is very different. It starts in a place of less surety. As the record progresses, it softens and turns more optimistic and hopeful. I’m way closer to the place I’m seeking than when I started this album.”

“I’ve learned how to open my heart in a way I’ve never opened it before,” she goes on. “You have to be brave to do that. That’s why the album is called Brave Enough. Vulnerability is often seen as a sign of weakness, however the exact opposite is true. The people who are authentic and vulnerable are the bravest. Gavi, was so Brave. He loved with his whole heart and after he passed, I had to be brave enough to keep going.”

Now, she’s ready to share that message with countless fans worldwide. “I want people to feel like they can be brave enough do the things they want to do,” she leaves off. “Everybody has hopes and dreams. Teach yourself to gain the courage you may not have in the moment. This record is proof you can.”

Tickets priced €32.50 go on sale this Friday 21 October at 9am through www.ticketmaster.ie & usual outlets nationwide. 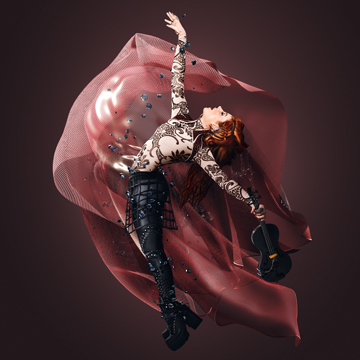