the return of the International smash-hit sensation

“A wild night of entertainment that will make you want to change the world” The Age, Melbourne

“Gorgeous, with glitter on top. Beg, borrow or steal a ticket”

The award-winning theatrical explosion has set hearts and minds alight all over the globe, and is coming home for 6 shows only as the headline show of Dublin Dance Festival - from 1- 4 May 2019

Thrilling, exhilarating, uplifting and utterly unique - this theatrical explosion will set hearts soaring and pulses racing once more during this very limited run in Vicar St.

A disorderly cocktail of wild theatre, gut-punching spoken word, banging jigs, slapstick comedy and eye-popping circus, RIOT has left audiences worldwide dazzled, dizzy and ready to change the world. Infusing the magic of theatre with the excitement of variety and the energy of the dance floor, it's your big night out, with a delicious twist.

So meet the RIOT family at the barricades once more for a night of wild theatre, thumping tunes, slapstick comedy and jaw-droppingly sexy circus. Featuring Panti, Lords of Strut, Kate Brennan, Up & Over It, Ronan Brady, Alma Kelliher, Adam Matthews, Nicky Kavanagh, Megan Riordan and a surprise special guest each night.

Celebrating more than ten years of explosive events, from Poptent at Electric Picnic and Alice in Funderland – The Musical, to the extraordinary Where We Live as part of St Patrick’s Festival and the legendary club night WERK, RIOT is THISISPOPBABY’s most entertaining show to date. Uniting the hottest stars of Irish stage and screen in a glittering roulette of the brilliant, brazen and downright bizarre, RIOT has travelled the world and returns home for six shows only next May at Dublin Dance Festival. 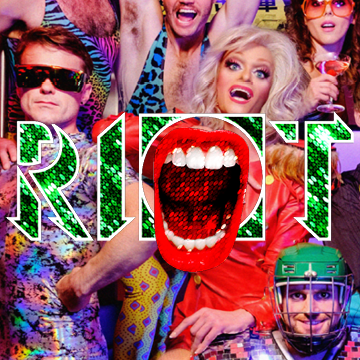