Ninja Sex Party bring their International tour to Dublin’s Vicar St for one night only this October.

Since Ninja Sex Party’s inception in 2009, the band has performed sold-out shows across the US and Australia, released more than 40 music videos, garnered over 1.25 million YouTube subscribers, and was Billboard’s top selling Comedy Artist of 2018. In October 2019, on the way to a European tour, the band will celebrate its 10th anniversary by playing the Credit Union 1 Arena in Chicago, IL, their first-ever arena show. Along with Arin "Egoraptor" Hanson from Game Grumps, Dan and Brian are also in the band STARBOMB, which performs comedy hip hop songs about video games.

One of Cool Patrol’s standout tracks is “Danny Don’t You Know”, a hilarious but heartfelt pep talk Danny Sexbang delivers to his awkward, nerdy younger self — played in the video by Stranger Things star (and longtime NSP fan) Finn Wolfhard — promising him that things will get better as he gets older and learns to unleash his inner “spandex butterfly.” “That ties in the more serious side of what we’re doing,” Danny says. “It’s a celebration,” Brian adds. “We’re these two guys that grew up weird and stayed weird, and now that’s working in our favor as opposed to, you know, people beating us up for it.”

Maybe that running theme of celebrating the nerds, geeks and outsiders that runs through all of Ninja Sex Party’s music explains the devotion of their massive fan base — over 1.25 million YouTube subscribers and 710,000 Twitter followers strong. “We did not anticipate how emotionally invested the fans would become,” Danny says. “It gives us the sense of, ‘Oh, good, we’re doing something that matters.’ It’s not just stupid. It’s stupid and meaningful.’” 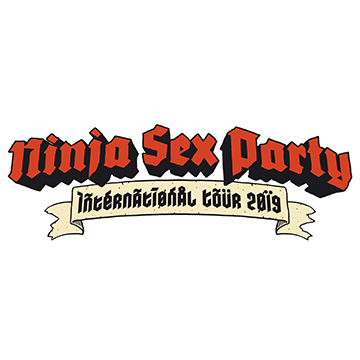