announces concert in support of

Tickets on sale this Monday 23rd May at 9am

Christy Moore today announced that he will perform a special concert at Vicar Street on 11th July in support of Women’s Aid.

Women’s Aid has been working to stop domestic violence against women and children since 1974. As a leading support service, their ethos is based on listening to and believing women, and giving them the support they need to escape and recover from abuse. In addition to this, through advocacy, representation and policy reform they seek to create an Ireland where domestic violence is not tolerated. Women’s Aid will remain at the forefront of this endeavour, supporting women and advocating for change, until Ireland is free from domestic violence against women and children.

Tickets for this special concert, priced at 50 euro, go on sale this Monday 23rd May at 9am from Ticketmaster.ie

For more on Women’s Aid go to www.womensaid.ie/ 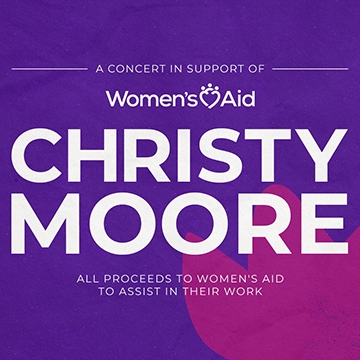