The Legend Of Luke Kelly

Celebrating the memory and music of a true Irish musical legend.

On January 30th 1984 it is said that the whole of Ireland grieved the early death of Dubliner Luke Kelly. He has left an indelible mark as being the greatest folk artist of the 20th Century and his music is widely regarded as one of Ireland's cultural treasures.

Dublin man & multi-instrumentalist Chris Kavanagh returns to Vicar Street to mark Luke Kelly's 39th Anniversary. It has been said by many that Luke's presence can still be felt at these annual concerts that create such an electric atmosphere.Past shows in Vicar Street have seen the regular performances of John Sheahan and Luke's family, as well as past special guests such as Damien Dempsey, Declan O'Rourke, Shay Healy & Christy Dignam. The January 2019 concert was particularly memorable, as President Michael D.Higgins and his wife Sabina attended. Chris received rave reviews in Germany while on tour with The Dubliners in 2011 and since has performed all over Ireland, Europe and Australia.

"A beautiful blast from our beautiful past"..TODAY FM

"You might find that you have to pinch yourself" ..RTE

'The first time I heard Chris Kavanagh singing, I rejoiced. Here, at last again, was the real thing, a genuine Irish ballad singer, who did justice to the songs. Like his hero Luke Kelly, Chris Kavanagh wraps himself around the songs and gives them their full integrity as stories, sung with the kind of vibrant interpretation the songs deserve. Chris called his show “The Legend of Luke Kelly” and this famous member of The Dubliners can rest easy that his legacy is in safe hands." - Shay Healy

"We're so Proud and delighted with the way Chris Kavanagh has honoured Luke's music and memory with such dignity and respect." - The Kelly Family 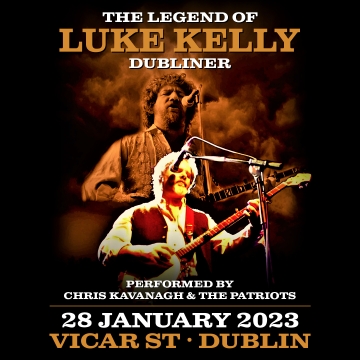