Selective Memory are absolutely thrilled to be bringing Norwegian rap artists Karpe to Ireland for the first time.

“This is the most beautiful show in the world."
- Rolling Stone

The duo consists of audiovisual artists Chirag Rashmikant Patel andMagdi Omar Ytreeide Abdelmaguid. They are the biggest act in Norway – always raising the bar when it comes to audiovisual concepts, productions, and releases. They have produced hit after hit, received a bunch of awards and made both headlines and history with their spectacular live shows and ambitious ideas.

This is one show not to be missed! Tickets €24.50 are on sale this Friday 14th Oct at 10am from Ticketmaster.ie
TICKET LINK

What the press have to say about Karpe

"...with more than two decades as one of Norway’s most beloved acts, the message is clear, deliberate and was even delivered over the loud speaker by an AI-affected female voice: This is the most beautiful show in the world.”
Rolling Stone

"...its message of unity and tolerance are unmistakable: Their hit “PAF.no,” which closed
the two-plus-hour-long set, features a chorus of “Allah, Allah, Allah,” a remarkable thing to hear a crowd of 10,000 boisterous Norwegians joyously singing along with." 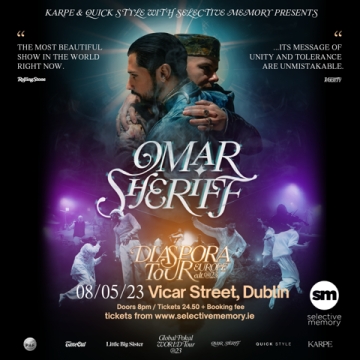