A Celebration of John Prine

A Celebration of John Prine

For five decades John Prine wrote rich, witty, playful and plain spoken songs that touched millions of people globally. He was one of the only artists to labour under the ‘new Dylan’ tag, that could boast Dylan himself as a fan. His songs have been covered by luminaries such as Johnny Cash, Justin Vernon (Bon Iver), Lambchop, Bonnie Raitt, Nanci Griffith and Miranda Lambert. Kris Kristofferson commented on the young Prine, “This guy is so good we will probably have to break his thumbs”.

On the 3rd anniversary of his passing, together with Hibernacle and Turning Pirate, the Irish music industry will come together and celebrate one of the most loved and respected songwriters of our time at a venue that John Prine enjoyed playing himself, many times.

The lines between audience and stage will be blurred as we weave our way through the music of John Prine with a show from 8pm - 11pm with Lisa Hannigan, Declan O’Rourke, Mick Flannery, Wallis Bird, Scullion, Carsie Blanton, John Smith, Gavin Glass, Seba Safe, Ailish Laffey & Fabien Joyce and we are very excited to welcome John’s son, the very talented Tommy Prine to be a part of this special night ahead of some of his own shows in Ireland in April. To top it off, there are a couple of more VERY special guests to be announced for this show in early 2023. 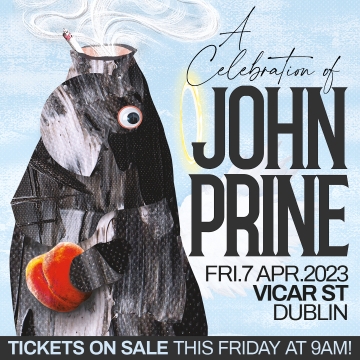