Declan O’Rourke has announced that he will perform with a full concert orchestra at Dublin’s Vicar St for one night only on 7 May 2016.

Over the last 4 years Declan O'Rourke has handpicked some of his most popular material and re-imagined the arrangements for a full concert orchestra. Since 2012 O’Rourke has played 5 sold out concert hall sized venues with these works, accompanied by the RTE Concert Orchestra. The results have been spectacular, and the audience responses overwhelmingly positive.

Late last year Declan decided to commit this work to record his 5th full length record 'Declan O'Rourke, In Full Colour' which will be released to coincide with the concert this spring.

“He writes the sort of classic songs that people don’t write anymore, that sound like they’ve been around forever […] Listen to Galileo, which is possibly the greatest song written in the last 30 years.'' Paul Weller of ‘The Jam’, Mojo Magazine

"Compassion, romance, a sense of mortality and a sense of history run through the songs of Declan O'Rourke. “You’ve got to be brave and believe,” one song advised, without cynicism or too much sentimentality.” Jon Pareles of The New York Times 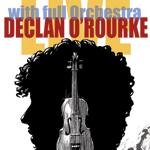