‘Cradle To The Grave' the band’s latest & 14th studio album which features the first collection of new songs from Chris Difford and Glenn Tilbrook since 1998. Squeeze have long been a captivating live act with an array of chart hits - which also includes the likes of 'Take Me I'm Yours', 'Slap And Tickle' and 'Pulling Mussels (From The Shell)' - but on this tour fans will be treated with new tracks from the new album.

Chris says of their fresh songs: “We’ve grown up a lot in the last few years, musically. We still love and own our past, but as musicians we needed to grow.”

Produced by Glenn Tilbrook and Laurie Latham, 'Cradle To The Grave' was recorded at 45 RPM Studios in Charlton. The band features Glenn Tilbrook on vocals and lead guitars, Chris Difford on vocals and acoustic guitar, Simon Hanson on drums, Stephen Large on keyboards and Lucy Shaw and John Bentley share bass duties. Guest musicians include Melvin Duffy on pedal steel, Dennis Greaves on guitar and Mark Feltham on harmonica.

The group first formed in 1974, shortly after Chris Difford and Glenn Tilbrook had begun their songwriting partnership, brought together by an ad in a sweetshop window. By 1977 they had made their recording debut and enjoyed a string of hits which lasted until 1982, the maturity of their songs outliving their initial burst of chart activity on the back of New Wave. Over the years there have been solo careers and occasional separations, but the Ivor Novello Award-winning songwriting duo Chris and Glenn got back together eight years ago to relaunch Squeeze. 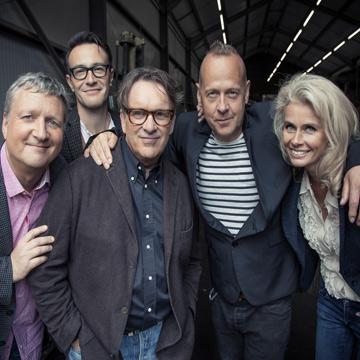