Penning songs that are offbeat in narrative, but literate and emotionally revealing, and performing them in a soulful, idiosyncratic style that reveals both strength and fragility, Cat Power was one of the most acclaimed singer/songwriters to emerge from the 1990s indie rock scene, a one of a kind artist unafraid to reveal her inner self in her music and follow her muse in a variety of different directions.

Back in 1992, Power relocated from Atlanta to New York City and initially focused her energies on writing songs, but as she became aware of New York's experimental music community, she was emboldened to put fresh emphasis on performing, and began playing semi-improvised shows around the city. In 1993, Power became acquainted with members of the group God Is My Co-Pilot, and with their help, she released the first Cat Power single, "Headlights" b/w "Darling Said Sir." Later the same year, Cat Power opened for Liz Phair in New York, and two of the fans who caught the show were Tim Foljahn of Two Dollar Guitar and his friend Steve Shelley of Sonic Youth. Foljahn and Shelley were impressed enough with Power that they volunteered to help her make an album, and they backed her on her first full-length album, Dear Sir, released by Plain Records in 1995. A second album, Myra Lee, was issued by Shelley's Smells Like Records label in early 1996, featuring unused material from the Dear Sir sessions. Strong reviews and growing interest from the indie music community led to Power signing with Matador Records, and her third album, What Would the Community Think, appeared in the fall of 1996.

In 2006, Power released The Greatest, an excellent soul-influenced album which was to be followed with a tour but the road trip was cancelled when her long simmering emotional problems and troubles with alcohol came to a head. Power would later tell a reporter, "The doctor said I had a psychotic break because I was suffering severe, massive depression and overwhelming stress." Power checked herself into a hospital to deal with her nervous breakdown and her alcoholism and a few months later, she was back on the road with the musicians who helped her record The Greatest, delivering strong, confident performances and telling the press she had finally controlled her drinking problem.

Sun, Cat Power’s ninth studio album, first album of all original material since 2006’s The Greatest was released in 2012. Six years between albums would be a lifetime for many artists, but Power managed to pack a couple of lifetimes' worth of experiences between The Greatest and Sun. A happy relationship, health issues and writer's block were among the many things that kept her away from music during that time, and with a life that full, it's no wonder that this album, seventh set of original songs, is so different than the one that came before it. Instead of working with veteran musicians, she wrote, recorded, and produced Sun on her own, added electronic instruments to her repertoire.

Sun lives up to its name, but its album cover is more revealing: like the rainbow crossing Power's face, these songs are the meeting point between a stormy past and optimism for the future. 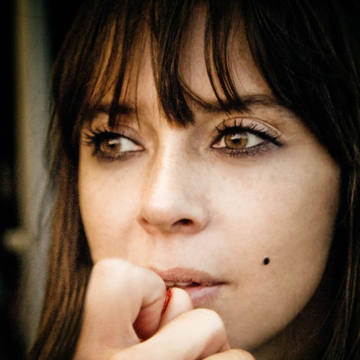