After spending a year hiding in their Parisian studio, Caravan Palace resurface with brand new material, ‘Miracle’. An electro track made of contagious grooves, marking a change in their style and giving a taste of their new album that will be released in August 2019.

‘Miracle’ is the awaited follow-up of their 2015 album, <I ° _ ° I> which represent 230 000 albums copies in the world, including 125 000 in the United States of America only. The album is certified GOLD IMPALA in Europe and PLATINE EXPORT by UPFI (Union of Independent French Phonographic Producers).

A success accompanied by a real recognition of the medias: the band performed on live TV at Jools Holland, the Jonathan Ross Show, Taratata, Tonight at the London Palladium but also at the prestigious BBC 2 Hootenanny.

Caravan Palace don’t want to settle on impressing the live scene only, they are one of the most viral acts, with stats that are constantly rising. 1 Million of subscribers on their YouTube channel, 1 Million of monthly listeners on Spotify, 250 Million of streams on Spotify, 170 Million views on YouTube for ‘Lone Digger’ music video and 1.6 Million uploaded videos by young TIKTOK consumers (which is the most downloaded 2018 mobile application in the world). 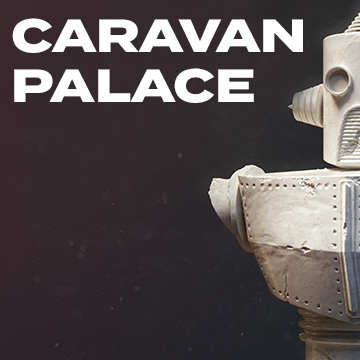