Making sense of bizarre British behaviour was the seed from which his world-beating Irishman Abroad podcast was grown and now it forms the basis of “an exhilarating hour of standup you’ll find hard to beat for sheer laughs per minute, depth and size” (The Metro). Notions Eleven is the new standup show from the man responsible for the multi-million download podcast phenomenon Irishman Abroad, and standout tv appearances on Tonight At The Palladium, Russell Howard’s Good News, How To Win The Eurovision and The Apprentice “You’re Fired”. Following a sell-out run at the Dublin Fringe, being named Irish Comedian Of The Year in 2017 and supporting Jack Whitehall on his arena tour, Jarlath brings his newest and most political hour of standup to the nations favourite comedy venue for one night only. The show will be filmed for an online release to be announced later in the year.

Since moving to London Jarlath Regan has produced the iTunes award winning, multimillion downloaded podcast, An Irishman Abroad, become one of the most talked about names in comedy and become an activist for organ donation when he donated a kidney to his brother. His last show Organ Freeman won him rave reviews and a standing ovation last time he visited Vicar Street.  This time around he didn’t need to remove another part of his body to write a show. With Notions Eleven he sets his comedy gaze on the most bizarre three years in the history of these two islands.

Jarlath left Dublin for the streets of London six years ago and hit the ground running. While booking major television appearances on Tonight At The Palladium, Russell Howard’s Good News, Standup Central and tour support for comedy supremos Jack Whitehall and Marc Maron, he has been lauded by the press for his interviewing masterclasses with the some of entertainment’s most reclusive characters including Boy George, Gabriel Byrne, Dylan Moran, Hozier, Aidan Gillen and Stewart Lee. The Guardian went as far as to say that "Every single young person reading this should go download this podcast and listen to it every week for the rest of time."

Known for his ability to spin a yarn while rinsing a subject of every punchline available, Jarlath has become a headliner in every major comedy club in the UK while also selling out two dozen of solo shows at his last Edinburgh Fringe Festival. In Notions Eleven he returns to his role as the fish out of water, Irishman Abroad as he marvels at the Brexit catastrophe as it unfolds. From the sheer ignorance of British politicians to basic Irish history to the bizarre impact lies in public office have on how we raise our kids, Notions Eleven is a one of a kind show from “a very funny man at the peak of his powers” (The Irish Post).

"My pick of the festival. A funny prick."- Joe Wilkinson 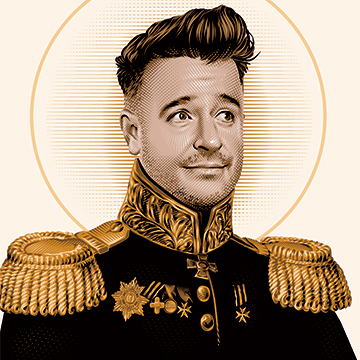