Catch their only live performances this year in Ireland!

Today, Aiken Promotions proudly announces a second and final show for Girl Band on 23rd November live at Vicar Street, due to popular demand. Tickets for 22nd November show are sold out.

Tickets for 23rd November on sale from Ticketmaster.ie and outlets Nationwide.

Girl Band announced details of their brand-new album “The Talkies” last week, it will be released on September 27th,2019.

The album was produced by the band’s own Daniel Fox and will be available on Vinyl / CD / Stream. This is the follow up to their debut album “Holding Hands with Jamie”that came out four years ago almost to the day.

“The Talkies” was recorded in November 2018 at Ballintubbert House, a stately home on the outskirts of Dublin “a few pay grades above what we’re used to”. The alien construction of Ballintubbert and its corridors help to navigate Girl Bands cataclysmic sound within a world of its own.

Bandmember Alan Duggan underlines this thought: “In many ways the idea behind the album was to make an audio representation of the house” -Daniel continues - “We recorded all the drums twice: once on the landing and once in the cellar, and during production we could actually cut in between both these sounds.”

Daniel with his feet in both camps as musician and producer explains: “After we cancelled the last tour we weren’t really writing together as much anymore so we were more into demoing and writing down parts then cutting them up, collaging them together in the computer and reconfiguring them that way”. 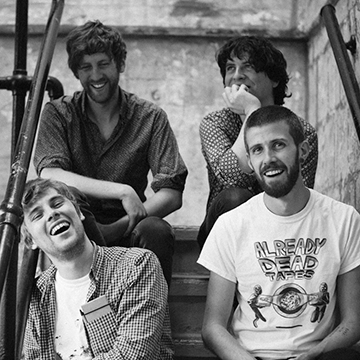