Billy Bragg today announces that he will tour the UK and Ireland in autumn 2021.  Billy previously toured the UK/Ireland on his epic 'One Step Forward, Two Steps Back' tour in 2019.

Says Billy: "In these challenging times, we all need something to hang on to. Like everyone else, my plans for 2020 have been disrupted by the pandemic, but today I'm announcing an extensive UK & Irish tour for this time next year to give me something tangible to work towards. My hope is that, by then, we'll be able to get together again and enjoy the uplift that live music brings, to audience and performer alike. Hope to see you next autumn."

Tickets go on sale @ 10am Friday 16th October via Ticketmaster!

Billy Bragg has been a fearless recording artist, tireless live performer and peerless political campaigner for over 35 years. Honoured with the PRS Outstanding Contribution to British Music award at the Ivor Novello awards in May 2018, he is regarded a valuable statesman and activist.

His peerless career has been marked by numerous milestones, including a number one hit single, having a street named after him, meeting the Queen, being the subject of a South Bank Show, appearing onstage at Wembley Stadium, curating Left Field at Glastonbury through thick and thin, and once sharing spotted dick with a Cabinet minister in the House of Commons cafeteria.

Earning a mention in Bob Dylan's memoir, he is the author of three non-fiction books, the second of which, Roots, Radicals & Rockers, was shortlisted for the Penderyn Music Book award and was source material for a BBC4 documentary about the skiffle classic Rock Island Line. Still as relevant as ever, in 2019 he sold out his three night special 'One Step Forward, Two Steps Back' tour at venues across the US and UK, making new fans and stirring the blood of older ones. All of which proves that at their best, Billy's songs present what the Guardian called 'the perfect Venn diagram between the political and the personal.' 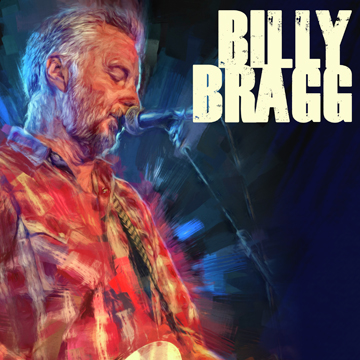