LIFE IS GOODThe social and political awareness that drives Flogging Molly’s music is never moreprominent than in their upcoming new releaseLIFE IS GOOD-a strikinglypowerful albumand it arrives at astrikinglykeytime. The sixth studio album by the renowned Celtic-punkrockersnow in their 20thyear is mature, well crafted, equally polished and almostaggressively topical. It is filled with rousing songs that are timeless in their sentiment, butdirectly related totoday’s most pressing concerns: Politics, the economy, unemployment,planned boomtowns gone bust, immigration policies gone awry, and much more.

For singer and lyricist Dave King, it may be the lyrical couplet contained within the surging“Reptiles (We Woke Up”) that points toward the album’s central theme. “We woke up,”sings King, “And we won’t fall back asleep.”

“The thing is,there are thingschanging,” says King. “That’s why I wrote that line,‘Likereptiles, we'll all soon be dust someday.’It’s quite scary, especially for somebody who haschildren these days--bringing up family in this environment of who’s welcome and who’snot welcome. I'm talking about the cultures in America and the UK--especially Americanimmigration.

Life Is Good thus serves as a wake-up call to those who have simply stood by while far-reaching political decisions were made that had serious impact on them. And, significantly,it also serves as notice that the time for action is now.

And people are indeed taking action, adds King, which is a crucial point.

“I think especially with things like government--I think we all tend to fall asleep a little bitwhen it comes to other people that are making decisions for you. I think we should be theones influencing the government tomake these decisions. It’s a great thing that we’re nowtaking to the streets again. And it’s a positive thing.

”Imagery abounds onLife Is Good, and one of the most memorable images might be found in“Adamstown,” the saga of a planned community west of Dublin that came to a halt in mid-construction a decade ago when the Irish economy crashed--and left little more than a ghosttown in its place.

“It had a huge negative connotation to it,” King says of the eerie, unfinished settlement. “Butnow it’s starting to turn again, people are starting to move there, businesses are starting toopen, and there is hope.

”Thematically, hope and inspiration are a major part of “The Handof John L. Sullivan,” arollicking track about the legendary “Boston Strong Boy” who was the first ever heavy weight champion of gloved boxing from 1882-1892. Sullivan was a hero to many, andhis story has a cultural significance that fits squarely within the story Flogging Molly wantto tell with Life Is Good. 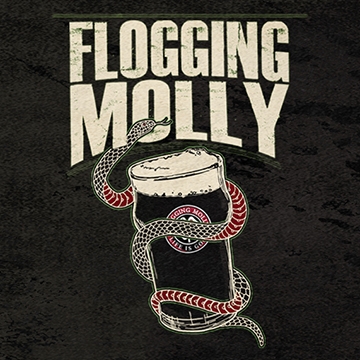