Tickets on sale this Friday

Listen to The Upswing from the live album  https://on.soundcloud.com/gvNF1

Celebrating their run of sold out shows together Bell X1 & Dowry Strings today announce tour dates for Dublin and Cork, along with a new live album. The album was recorded Live at St Luke’s in Cork this past April with Phil Hayes.

Live at St Luke’s the album will be available digitally on 25th November.

“It’s been a real shot in the arm for us to play and re-imagine some of the old tunes with Dowry strings, and a springboard for some new ones.  It’s also led to a different way of playing live – we try to match the acoustic level of the strings, so playing much quieter than we would have been used to. Everyone playing into a shared space, mixing organically at source. It’s quite something to be up close with the Dowrys on a quiet stage and just be immersed in the sound… We’re thrilled to have captured this and to be putting out the live record”. – Paul Noonan 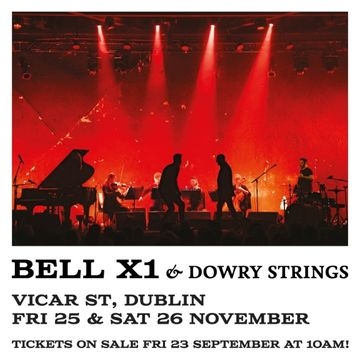