The original voice of Smokie will perform on the Sunday 19th of February 2023 at the Vicar St. Dublin.

He formed a band at school and played all over the UK in the late 60s and early seventies. By 1974 the group had developed their own sound reflecting their close harmonies and they changed their name to ‘Smokie’. Their first album ‘Pass it Around’ was released in 1975 including their first hit ‘If you think you know how to love me’ followed by a string of 15 hit singles like ‘Living next door to Alice’, ‘I’ll meet you at Midnight’, ‘Lay back in the arms of Someone’, etc. Plus a duet with Suzi Quatro, “Stumblin’ In” which gave Chris his first taste of success outside the group.

Chris’s solo career took off in 1986 with the song, ‘Midnight Lady. In 1994 Chris was awarded ‘International video Star of the Year’ by CMT Europe for the videos ‘Jealous Heart’, ‘The Growing Years’ and ‘Red Hot Screaming Love’. That same year Chris formed a new band and went on tour for the first time in six years.

This December he will release his brand-new album called “Just A Man” which he has written and recorded with his old mentor and friend Mike Chapman as producer. Mike has written and produced scores of worldwide hits with the likes of, ‘Blondie’, ‘Tina Turner’, ‘The Knack’, ‘Sweet’, Suzie Quatro, ‘Smokie’,and many others. 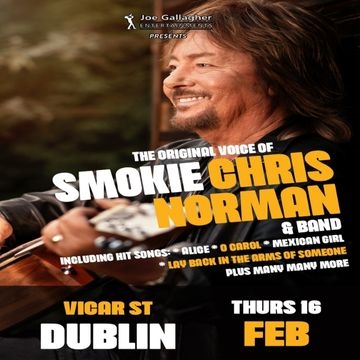