Formerly of the Dubliners:

Sean Cannon, Eamonn Campbell, Gerry O’Connor & Paul Watchorn are all true legends of the Irish Folk music scene. Sean & Eamonn were members of iconic Folk Group ‘The Dubliners’ for close to 30 years while Gerry joined them for the final part of their 50th Anniversary Tour. He was a member of the famous Irish Folk Rock band, Four Men & A Dog and has played with everyone from Sharon Shannon to Shane MacGowan and he also tours with Blues Rock guitar legend Joe Bonamassa. Paul Watchorn, one of the best 5 string banjo players in Ireland, toured the world as a member of Derek Warfield’s Sons Of Erin for many years.

In 2012 the Legendary Irish Folk group THE DUBLINERS celebrated 50 glorious years in the music business by receiving a Lifetime Achievement Award at the BBC Radio 2 Folk Awards and rapidly followed it up with a sell-out concert tour of the UK, the highlight of which was a magical night at The Royal Albert Hall in London.

Sadly, however, they subsequently suffered a body blow with the sudden tragic death of founding member “Banjo” Barney McKenna. Quite naturally this meant that the remaining members chose to sit down and decide upon the bands future. John Sheahan, after 48 years of touring, decided it was time to step off the tour bus and it was agreed that The Dubliners, as a touring band, would come to an end. THE DUBLIN LEGENDS were born.

THE DUBLIN LEGENDS will continue the legacy started by Ronnie Drew, Luke Kelly, Ciaran Bourke, Barney McKenna & John Sheahan back in Dublin 1962. As Barney himself said “It’s Too Late To Stop Now”.

“The Lads” are looking forward to entertaining and meeting their old friends & fans all over the globe and will continue to play all the classic songs and ballads known the world over; Whiskey in The Jar, Dirty Old Town, The Wild Rover, Seven Drunken Nights, The Rare Auld Times, Finnegan’s Wake, Molly Malone, The Monto, Hand Me Down Me Bible, The Irish Rover, Black Velvet Band and many, many more. 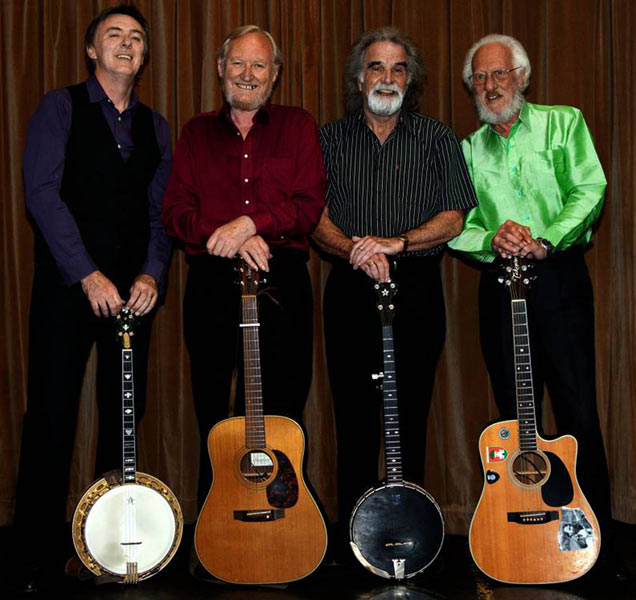